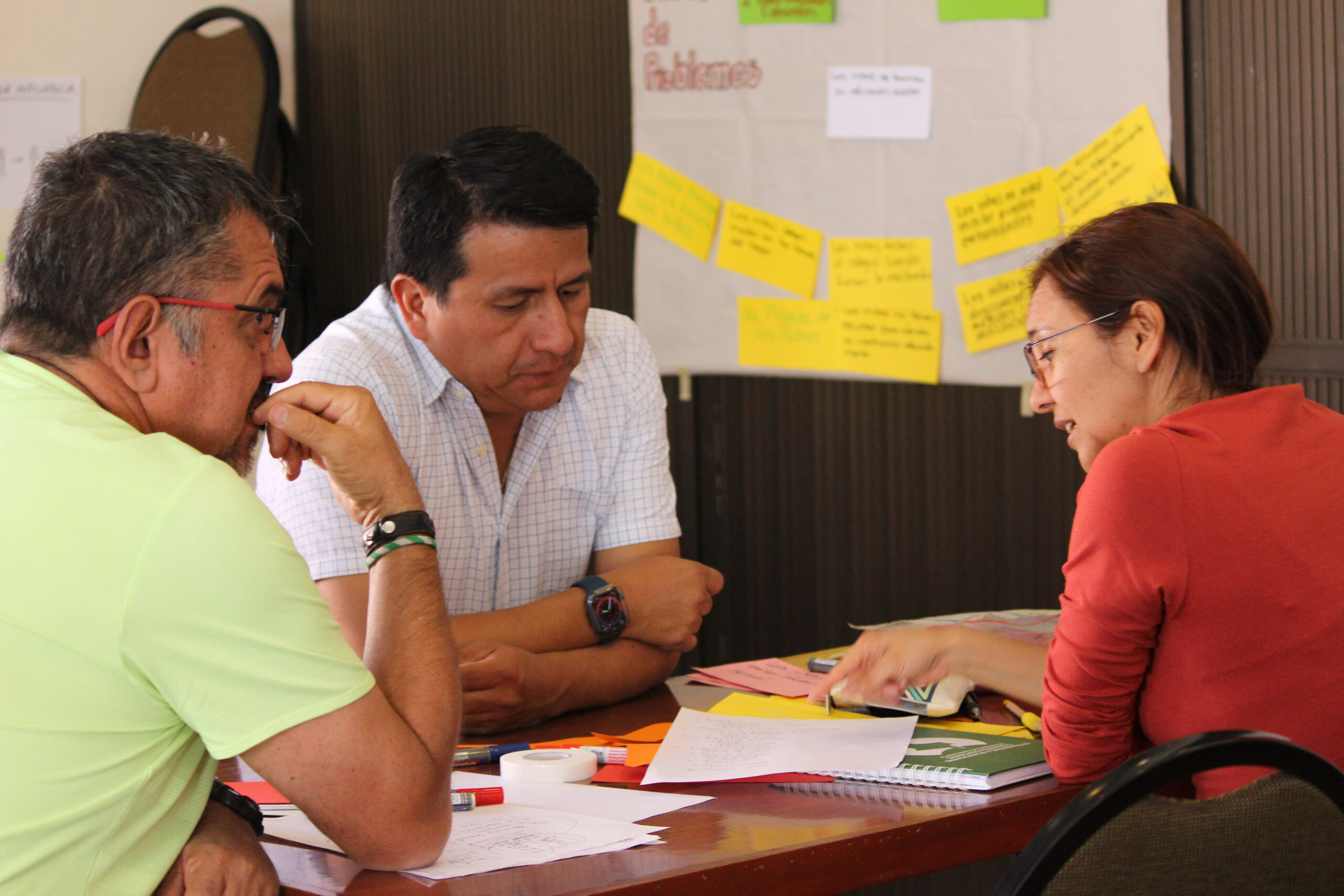 Trainings in three countries on three different continents. That is how the Strengthen the Roots project, developed by Wilde Ganzen and IUCN NL, started in autumn 2022, with the goal to protect the habitat and natural resources of as many as 1 million persons. In Bolivia and Indonesia, trainers were trained so that in the near future they will be able to share their newly acquired knowledge with small conservation organisations. In Ghana, nine small organisations received their first training in ‘local fundraising’.

In Sucre, the high-altitude city in the Bolivian Andes, the first ‘training of trainers’ took place in November 2022. Staff from the project’s Bolivian partner organisation Natura Bolivia was trained during 2 weeks, using the capacity-building methodology of the Change the Game Academy. With their newly acquired knowledge, Natura Bolivia staff will deliver the first replicas of this training to small community organisations in the municipalities of Charagua and Roboré, located in the Gran Chaco region of Bolivia, in early 2023.

What is the Change the Game Academy?

‘Deforestation is major problem in the Gran Chaco region, as more and more trees are cut down to make way for mechanised farming of soy and cattle ranching,‘ says Sander van Andel, who is closely involved in Strengthen the Roots on behalf of IUCN NL. ‘The conversion of forest areas into agricultural and cattle breeding land endangers the ancestral territory of the original inhabitants. Through targeted training, it is thought, residents of these communities will learn how to strengthen their capacity, raise more funds and develop better lobbying activities for the sake of protecting their natural and cultural wealth and boosting their well-being.‘

Trainers were also trained in Indonesia. In Padang in Sumatra, 14 staff members from the project’s partner organisation KKI WARSI attended the ‘training for trainers’. Early 2023 they, in turn, will train communities in Mudiak Baduo and Sumpur Kudus in West Sumatra, an area stretching along the Batanghari river basin, the second largest river basin in Indonesia. To make the area’s forest management and their livelihoods more sustainable, the communities and the organisations they set up are learning how to strengthen their capacity in areas such as effective forest protection, forest product processing and natural resource management.

Protection of Atewa forest and Mole landscape in Ghana

In Ghana, Wilde Ganzen partner WACSI, in collaboration with IUCN NL partner A Rocha Ghana, already organised a 5-day training course for nine small nature conservancy organisations. These organisations are working to protect two landscapes: the Atewa forest and the Mole landscape. In the Atewa forest, biodiversity and the availability of (drinking) water are under pressure. The forest is affected by illegal activities such as logging, hunting, agriculture and gold mining. There are also plans for large-scale bauxite mining in the area. In the Mole Ecological Landscape, besides illegal logging and agriculture, charcoal production in particular is a major cause of land degradation and forest decline.

Worldwide, millions of people directly depend on the landscapes they live in for their income, food and water. These landscapes are under increasing pressure, for example due to the growing demand for resources. Local residents who want to combat the loss of their land and overexploitation of natural resources are uniting in small conservation organisations. With Strengthen the Roots, we strengthen these small organisations by teaching them to raise funds locally and stand up for their rights.

‘Nature conservation benefits greatly from strong communities and grassroots initiatives,‘ says Evelien van den Broek, Senior Expert Environmental Justice at IUCN NL. ‘Local and indigenous communities have been custodians of the landscape for generations. They have a strong connection with nature and a deep knowledge of how to protect it. When local organisations are stronger and more financially independent, they can make a real difference.‘

Wilde Ganzen’s Sander Otten adds: “By the end of 2025, Strengthen the Roots aims to empower just under 30 organisations in six unique nature reserves spread across three countries to protect their habitats and become the drivers of change themselves. With these initiatives we aim to benefit, both directly and indirectly, approximately 1 million people living in these areas.”

Strengthen the Roots is a partnership between A Rocha Ghana, IUCN NL, Natura Bolivia, WACSI, WARSI and Wilde Ganzen that aims to strengthen local communities and their organisations living in or around threatened wildlife areas so that they can mobilise support for their work. The project is made possible thanks to a financial donation of the Dutch National Postcode Lottery.